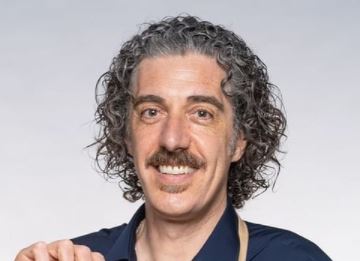 The twelfth season (or as they call in Britain, the twelfth series) of The Great British Bake Off premiered on 21 September 2021. And once again, we have twelve amazing bakers fighting for the top prize. Among the twelve contestants is Giuseppe Dell’Anno, a chief engineer from Bristol.

Read about Giuseppe Dell’Anno below.

Giuseppe Dell’Anno On The Great British Bake Off

By the completion of the first episode (on 21 September 2021), Giuseppe was still alive on the show and hoping to become Britain’s greatest baker. He was one of the judges’ favorite bakers but was not the Star Baker for the week.

His other fellow contestants in the show were Amanda Geo (56 and a Met Police detective from London), Crystelle Pereira (26, a client relationship manager from London), George Aristidou (34, a Shared Lives coordinator from London), Freya Cox (19, a student from North Yorkshire), Rochica (27, an HR business partner from Birmingham), Jürgen Krauss (56, an IT Professional from Sussex), Jairzeno Parris (51, ahead of finance from London), Tom Fletcher (28, a software developer from Kent), Lizzie Acker (28, a car production operative from Liverpool), Chigs Parmar (40, a sales manager from Leicestershire), Maggie (70, a retired midwife from Dorset).

Among them, Jurgen was the Star Baker in the first week and Tom was the one who was eliminated. The contestants were judged by the returning judges from the previous season Prue Leith and Paul Hollywood. And the show was hosted by Noel Fielding and Matt Lucas.

Giuseppe Dell’Anno was 45 years of age as of Sept 2021 and that was all we know about his age. What’s more, we do not know when exactly he was born. And thus we do not know his birthday nor his zodiac sign.

Giuseppe Dell’Anno comes from an Italian family. His father was a professional chef in Milan and he was born in Italy and raised in Milan around a lot of food and people who cooked. It was his father who influenced him to become a baker. His father baked his family a fresh cake on Sundays.

Giuseppe derives his baking style from Italy as well, with a lot of Italian flavors in them. Also, Giuseppe is fluent in three languages, native Italian, English, and French.

Not much else is known about his family.

Giuseppe Dell’Anno has a height of 6 ft. His distinct features include brown eyes and long curly black hair with a fair bit of grey in there. Giuseppe also has a thick and dark mustache.

On his Twitter handle, @giuseppecooks, he had 80 followers. And on his Tiktok channel @giuseppe.dellanno, he had only 11 followers. Giuseppe might not be very famous on social media but his fame will surely grow as more episodes of The Great British Bake Off airs.

He was also present on Facebook as Giuseppe Dell’Anno.

About NCC, it has been said that it uses the “state-of-the-art technology to help solve complex engineering challenges”.

Interestingly, NCC is part of High-Value Manufacturing Catapult, a company where the winner of the 2018 season, Rahul Mandal, works. Giuseppe was a good friend of Rahul’s.

Giuseppe Dell’Anno is a married man with three kids. He has three sons, names unknown, who love baking as much as he does. In September 2021, Giuseppe shared a photo of shortbread crostata prepared by his sons with the captions:

The kids baked a shortbread crostata with freshly picked blackberries. It’s ugly, knobbly, and patchy. Certainly not #gbbo standard! But it could not get any sweeter… This is what baking is about!

Not much is known about his wife. There is no name, no pictures, nothing but an offhanded mention of hers on his Instagram. A September 15 post on Instagram, a photo of him swirling flour into a bowl, had the captions, “Things you can only do if your wife is not around to check how much flour you spilled on the floor…”

We might not know his wife and know little about his kids, but the important thing was Giuseppe had an amazing family.