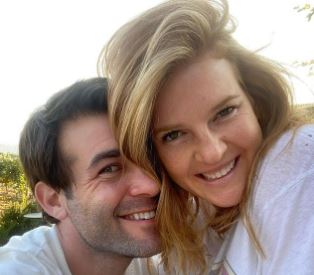 Meet Elizabeth Jae Byrd, wife of actor James Wolk who through the amazing portrayal of roles in The Crazy Ones, Mad Men, Zoo, Tell Me a Story, and Watchmen made his lane as a performer in Hollywood.

Once again with the release of Ordinary Joe on NBC on 20 September 2021, fans have been curious to know more about James (who plays Joe Kimbreau on the show) and married life.

So, the writing below is a never before covered Elizabeth Jae Byrid’s Bio that includes her age, net worth, Instagram reach, life with husband James Wolk, and more.

Elizabeth Jae Byrd is from her hometown of Atlanta, which is the capital of the U.S. state of Georgia.

Unlike the famous husband James, few details are known about Elizabeth outside of her marriage to him. And that includes her early life and family background.

Although we can tell you, she now lives in Santa Monica, California.

Then, her husband James, if you should know, was born to an art teacher mother, Edie, and a shoe-store owner father, Robert Wolk. Also, his Jewish parents raised him in Reform Judaism. So, James as a teenager worked as an emcee at bar and bat mitzvahs. He then went on to graduate from Farmington High School and the University of Michigan School of Music, Theatre & Dance.

Elizabeth Jae Byrd had less than an estimated $500K net worth by September 2021.

Reportedly, during 2014 she was employed in Hermosa Beach City Elementary and had a pay of $48,272 according to public records.

It is not understood if she continued the profession after she married her celebrity husband who, as per Celebrity Net Worth, had $2 million net worth by 2014.

Elizabeth Jae Byrd has been married to James Wolk since June 2015.

Before their Crossroads Estate’s Firestone Winery wedding in Los Olivos, California, James had shared with Harper’s Bazaar about how he asked Elizabeth to marry him. Of which we knew, he had initially an elaborate plan that kind of folded in on itself, so he did it the old-fashioned way. He and Elizabeth had taken their dog for a walk, and James with the beautiful cushion-cut diamond tucked into his waist had just got down on his knee.

Years later and the duo seemed to be as happy as can be together.

Every year when the clock strikes their wedding anniversary James is sure to come up with a message for Elizabeth as like this:

“Happy anniversary my beautiful bride. You make me so proud to be your husband and I’m blown away by you. To many, many, many more.”

She and her husband welcomed their first child, a baby boy named Charlie between late Jan. and early Feb. 2017. The to-be parents had documented growing baby bumps over the nine months on Instagram.

The Wolk party of three hen also went to include a girl child.

Speaking of their ‘how we met’ story — they met back in 2013 at Camp Twitch and Shout. James, back then a Board of Directors of the Brad Cohen Tourette Foundation also volunteered at the camp in Winder, Georgia for children with have Tourette syndrome. Elizabeth, meanwhile, was a schoolteacher, also volunteering at the camp. They were quickly drawn into each other, exchanged contact details and such and the rest is history.

She celebrates her birthday every year on the 1st of May. In 2021, she reached the age of 36, the same age as her husband. The Gold Derby Awards winning actor reached the age on 22nd of March.

She stands below 5’7” or 1.70 meters in height. Naturally blonde, she has features that make her appear no less than a professional model or an actress.

Until 21 September 2021, Elizabeth Jae Byrd had 452 followers on her private Instagram @elizabethjae. She shared 895 posts on the page and followed 840 others.

Elizabeth, however, did not seem as active on her Twitter @EliZabethJae.

You may as look into Elizabeth’s favorite items on Etsy, a global online marketplace for handmade, vintage items and craft supplies.