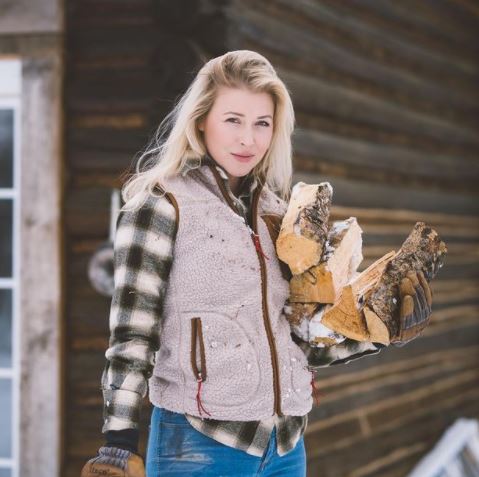 Linsey Toole is the fiancee of Freddy Harteis after his marriage ended with Jeannie Mai. They are parents to two children and were engaged in 2020 but Linsey isn’t wife yet as the couple is yet to get married. Her career has been of major interest to the fans of the couple.

So, here in this Linsey Toole [Freddy Harteis New Wife] Bio, you can read all about her age, her job, and details on her family.

Freddy Harteis and Linsey Toole met each other circa 2010. At the time, Linsey was modeling for a company. She was on the cover of the magazine and Freddy had a hunting show, so there were at the same place. At the time, a friend of Freddy was interested in Linsey. So Freddy came and got a magazine sign for her friend on the cover and that was how they met each other.

One time, Freddy invited her to go on a hunt out to his ranch. She initially had no interest in him, at all, but slowly, she get to know him a little bit more, she came to a realization that Freddy Harteis was a really great guy.

Linsey and Toole are now parents to two kids. They welcomed their daughter Emersyn Rose Harteis on 25 October 2018 in Saint Thomas Midtown Hospital in Nashville, Tennessee. She weighed 7 pounds 12 ounces and was 19 inches long.

While interviewing with AmoMama Linsey was asked about her pregnancy struggle. She shared, “I think my first one, just because it was unexpected and I was sick on top of it. You see all these girls get pregnant, and you see all the fun things that they go through, take pictures, do all these fun things. And I was just miserable. I couldn’t get off the couch. I was like, “man, this isn’t the way it’s supposed to be.”

Almost a year later, they further added a new member to the family, Huck Frederick Harteis on 17 November 2019. He weighed 5 pounds 150 ounces and was 17.5 inches long.

In early May 2021, Freddy put on an engagement ring on her finger, and she got engaged in her sleep. She created an Instagram post and wrote a caption, “Woke up like this 💍”

According to the exclusive interview, Freddy asked him to marry her last year but she lost the ring two weeks later. She suspected a construction worker at her house stole the ring as she searched high and low and never found it anywhere.

For the most part of her relationship with Freddy, she stayed silent about the divorce of Freddy with Jeannie. So, Linsey defended her husband which she wished she didn’t do. She told AmoMama that she confronted because she was pregnant and emotional. Linsey felt that Jeannie was cruel to her so she threw the shots back at her.

According to her IG post from late August 2021, her daughter was modeling for @bigrstores children’s clothes. She also shared that her son had a minor heart complication which was also an emotional time for her.

When speaking about the marriage or wedding, Linsey shared with AmoMama that she’ll probably wait was in no rush because they wanted to do it right. Also, Linsey confirmed that she and her husband would wait until things settled down.

When the relationship went public she had to face criticism from fans of Freddy’s ex-wife, Jeannie Mai Jenkins. They accused her of being a homewrecker.

Linsey Toole was born to her father John E Pfotenhauer and her mother Karen Pfotenhauer in her hometown of Plant City, Florida. Very little has been shared about her father. But one thing she had in common with her father was their shared love for hunting. Her mom graduated from Florida Southern College in December 2013.

Linsey is sister to at least one younger sibling, Savanna Rose. Growing up, their family didn’t have a lot of money they adored each other very much, and the same sibling love can still be seen today. For Linsey, home meant her sister Savanna. Savanna is five years younger than her.

Outside of her family, Linsey was also very close to her cousins and her grandparents. They make frequent appearances on her socials.

Linsey Toole attended Plant City High School. According to her LinkedIn, she was self-employed. If you look at her social media post, she lived a life of excess with a certain type of lifestyle. Traveling, having fun outdoors most of the time, riding horses, flying in private jets, she lived a dream of a large number of people.

She won Miss Racing Queen in 2014 and won prize money of $100,000. A before she had competed and made it to the top five in 2013. But, it was a tough time for her as Linsey was working for a man at the time who was dying, so she took care of him at the hospital. After the pageantry, she started working as a model. She starred in music videos. She also modeled for Western wear like Stetson and Wrangler.

Moreover, Linsey was into lifestyle modeling.

In 2019, where she made a post about 10 years challenge, Linsey stated that she lived in San Diego, had friends in high places. She believed that she would always be young and rich, partied all the time, stayed up too late, and drank too much. She went through an unhealthy cycle of pleasing people.

Linsey also has an IMDB account where she competed in Hooters Best Damn Dream Girl in 2007 and 2008.

William Smith is a veteran entertainment columnist. His insights into reality TV astounds everyone including his male friends.