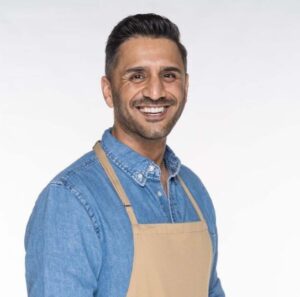 Chigs Parmar is stirring conversation as one of the contestants of the new edition of the Great British Bake Off. A lifelong lover of food but newly introduced to the world of baking, he is competing against other 11 bakers from different parts of the UK.

Tag along with this Chigs Parmar Bio where we address his age, details on his wife and kids, and his career as a whole.

As reported and shared widely, with his job at a halt because of COVID-19, Chigs decided to make good use of his time to pursue baking as a new hobby. He started baking at the beginning of lockdown in 2020. Initially, he started with a sourdough.

A self-taught baker, Chigs learned all of his craft from watching online videos to learn intricate baking techniques and chocolate work. Still, he is a natural at what he does best. Who would’ve thought that what started as a leisure time hobby, would pave a way for Chigs as a reality star in Great British Bake Off?

But, it happened for Chirag. In an interview with LeicestershireLive, Chigs shared, “No I never believed I would actually make it on the show but was over the moon to have been selected as a contestant – the hard part was keeping it secret given how excited I was to be on the show.”

He would be competing against the other 11 contestants. Others who will be joining him are Amanda, 56-year-old detective, from London; Crystelle, 26, a client relationship manager from London; Freya, a 19-year-old psychology student from Scarborough; George, 34, from London; Giuseppe, 45-year-old chief engineer from Bristol; Jairzeno, 51-year-old finance head from London; Jurgen who hailed from the Black Forest, Germany, Lizzie, 28-year-old car production operative from Liverpool; Maggie, a 70-year-old retired nurse from Dorset; Rochica, a 27-year-old junior HR business partner from Birmingham; and Tom, 28-year-old developer, from Kent.

With his attention to detail and organizational skills, Chigs believe that it would prove triumphant for his win.

Fun Fact: If Chigs could ever make a selfie biscuit, he would make of him with the Taj Mahal in the background.

Chirag ‘Chigs’ Parmar AKA Cherry Chirag hailed from Leicester, United Kingdom. He is of Indian-British ethnicity. Almost no information was shared on his family members. Sadly, he lost his father a while back and he took a trip to India with his family.

He appears to have at least one sibling. According to his IG post from 22 September 2021, he has a nephew named Emile.

“The guest of honor my nephew Emile, has arrived to share the first Bake Off episode with me,” he wrote on the post. However, no one in his family is a baker. But, all of them inspired him to bake.

Chigs Parmar worked in his job as a gross sales manager at Domestic & General. According to data-lead.com, he has 6 months of experience working as a sales manager.

If you’re wondering, an average sales manager makes £36,800 a year in the Leicester area, according to glassdoor. It could be as high as £62,000 based on the experience. Additional sales commission would be provided to the sales manager.

Chigs is an adventurous guy who loves bouldering, skydiving, and climbing. He called himself ‘the late bloomer’ on Instagram. Chigs appears to be determined having completed the Yorkshire Three Peaks Challenge, climbing 24 miles in under 12 hours.

Similar to the details on his family members, Chigs relationship status is also a mystery. A man in his early 40s, most people are already married at this age. However, we can’t say that for sure as he never spoke anything about getting married as of this point.

Most people of Indian origin (from his age group) follow the arrange marriage tradition, as it remains intact in the Indian culture. So, if he was ever married, whether he tied the knots following the old tradition or he married to someone he loved is also an interesting part of Chigs relationship, yet to be explored.

But, as of this writing, we have no knowledge of him having a wife or kids.