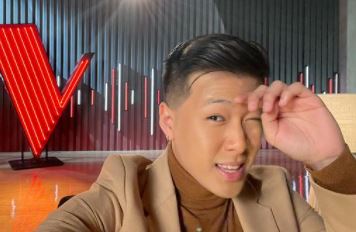 The Voice Season 21 returned to NBC on September 20, 2021, for its 21st season, with coaches Blake Shelton, Kelly Clarkson, and John Legend returning for their 21st, 8th, and 6th season respectively and Ariana Grande coming in place of Nick Jonas.

Blind auditions began airing on the premiere episode itself and among the contestants who went head-to-head in the first part of the blind auditions was Vaughn Mugol. Learn about the incredible vocalist, his mentor on the singing reality show, his age, net worth, personal life, and many more in the wiki article below.

Vaughn Mugol On The Voice

Vaughn first announced his The Voice audition in August 2021. He wrote, “I am so excited to finally announce that I auditioned for @nbcthevoice! Keep an eye out for me starting September 20!,” on his Instagram handle.

As we saw on the premiere episode, Vaughn incredibly sang Ed Sheeran’s hit song “The A Team’ to turn 3 out of 4 judges’ chairs. Three judges competing with themselves to take Vaughn in their team were Kelly Clarkson, John Legend, and Ariana Grande.

About Vaughn’s performance, Ariana told him that she liked the little break and the fuller part of his voice. She also told Vaughn that he “really held it together” despite a small hiccup in his performances. After Ariana noted that she and Vaughn have a lot of things in common including their shared musical taste, she said, “There was only one tiny spot where I could hear it. I would love to work with you on perfecting those moments. We would be a good team here, just saying.”

Coach John also tried his level best to get Vaughn on his team. Just after John made his case, Kelly stepped in to make her case and win Vaughn over.

However, the decision solely depended on Vaughn himself and when the moment came, the terrific vocalist opted to go on Team Ariana.

On September 21, 2020, Vaughn informed his fans and followers through Instagram that he had chosen Ariana as his mentor. He wrote, “Hello world! I can proudly announce that I will be representing #TeamAriana on @nbcthevoice !!! This is for all of the healthcare workers who are currently working on the frontlines! Thank you for all the love and support! 🤍”

Vaughn Mugol Nationality, Ethnicity, Is He A Filipino?

Vaughn’s ethnicity is Filipino-American as he also has Filipino roots. Under the language section of Facebook, Vaughn has written that he is fluent in Tagalog, which is the official language in the Philippines. Vaughn’s nationality however is American.

To talk about Vaughn Mugol’s family, he is the child of his parents, May Siangco Mugol (mom) and Neil Badillo Mugol (dad). Vaughn’s dad is a Registered Nurse at Kate Dishman Rehabilitation Hospital whereas his mom is RN at Christus St. Elizabeth Hospital.

Vaughn also has one sibling, a brother. His name is Dwight Siangco Mugol. Dwight’s Facebook account tells us that he studied BSc. in Nursing at San Beda University.

As of September 2021, Vaughn Mugol’s net worth was unknown. However, we are sure it was in the thousands.

Before traveling to California from Texas to take part in The Voice Season 21 blind auditions, Vaughn was a registered nurse. He completed his undergraduate studies and received a nursing degree from San Beda University in April 2016 and his nursing license in 2017.

Is Vaughn Mugol Gay? Does He Have A Girlfriend?

Vaughn Mugol’s performance on the blind audition of The Voice prompted many viewers to think if the Texas native was gay. Some of the viewers even asked the question on Twitter.

However, as of this writing, Vaughn has not answered any questions surrounding his sexuality. Therefore, we can’t say for sure whether he is gay or straight.

Coming to his personal life, Vaughn Mugol does have one girl with whom he sometimes appears on Instagram. As it turned out, the girl’s name is Miles Walvekar and she is just a travel buddy of Vaughn and not his girlfriend.

The Voice contestant Vaughn Mugol stands at an average height of 5 feet 9 inches and weighs no more than 70 kilograms.

Vaughn Mugol was reportedly born in the year 1994 and thus his age was 26 as of 2021. Vaughn gets tons of birthday wishes from his friends and family on the 14th of December every year. Vaughn’s zodiac sign is Sagittarius.